WHAT WEAPONS SYMBOLIZE IN DREAMS; A HELPFUL BIBLICAL GUIDE 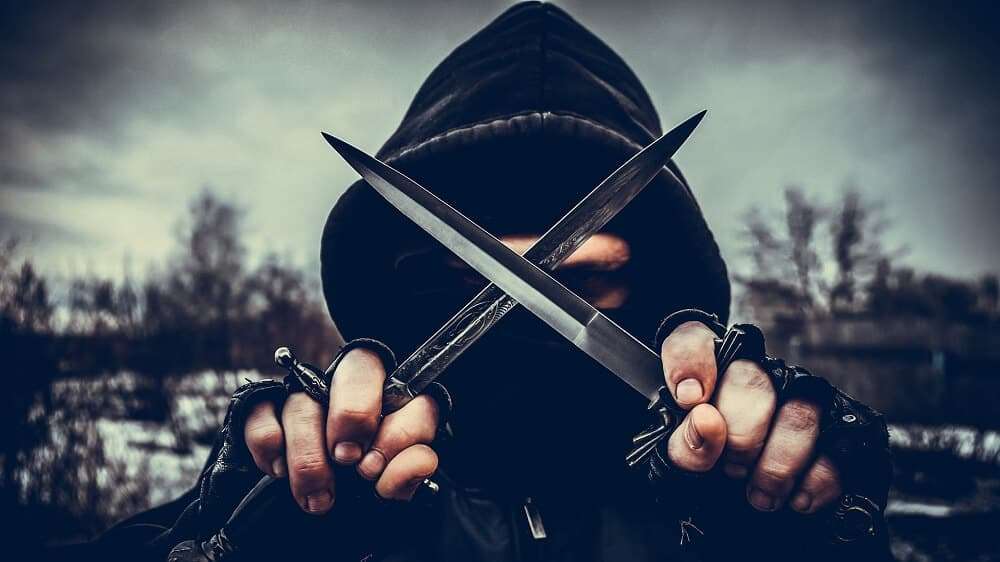 Whether you’re a regular dreamer or not, you can probably recall at least one dream you’ve had at some point in your life. Here I will explain three common weapon symbols; Swords, Guns and Knives, along with their possible biblical meanings:

Different weapons mean different things. A Sword would represent The Word of God, while a Gun would represent Authority (good or bad). A Knife would symbolize an ability to speak with skill and discernment, or be a warning to guard your tongue.

There are biblical ways to understand what God is saying, so read on if you would like a more detailed explanation.

A Quick and Helpful Explanation On How God Speaks In Dreams

God speaks in a very specific way, and it is important to recognize the correlation between the symbols you see in your dreams – in this case weapons – and how we are to interpret these symbols with a biblical understanding and outlook, using Scripture.

Firstly, dreams are typically more symbolic, while visions are usually more literal. That being said, I have had literal dreams and symbolic visions, and there are examples of both scenario’s in the Bible.

Secondly, there will usually be a positive or negative context in your dream, which you will need to consider when interpreting what the Lord is showing you.

For this reason, I’ve included some biblical references below which include both the positive and negative context for easy understanding.

Let us begin by looking at the following scripture;

There is one whose rash words are like sword thrusts, but the tongue of the wise brings healing.

In this example I’ll be focusing on the negative context. Here, the tongue is being compared to a sword, able to do a lot of damage if untamed.

From this scripture, we know that in a dream where you are being attacked by somebody with a sword, it could very well mean that there is somebody in your life who has the ability to inflict some damage to you, specifically verbally, in the form of verbal abuse, gossip or slander – it is illustrating the power of the tongue.

In the same way, if you are the one holding the sword and attacking somebody in the dream, the Lord may be warning you to use your tongue wisely and not operate in opposition to His Spirit.

On the other side of the coin however, taking note of the context and what is happening in the dream, it could also be showing you to speak the Word of God to protect yourself against an attack from the enemy. I’ll touch on this using a different scripture below.

Now let’s look at the Sword in a positive context using a different scripture:

For the word of God is living and active, sharper than any two-edged sword, piercing to the division of soul and of spirit, of joints and of marrow, and discerning the thoughts and intentions of the heart.

In this example, we can see that the sword is being used to represent the Word of God (Scripture) and its ability to ‘cut through’ the hardest of surfaces, and get to the very heart of a matter. In another way, I’ve heard it said like this;

As you check the Word of God out, it is checking you out!

Meaning of course that, as you read the Word of God, the Power that it carries will expose and convict you of your sin, thereby allowing you to make any necessary adjustments in your character that the Lord may be highlighting.

In the same way, as you speak the Word of God, the words you speak carry the Power of God to stop the plan and attack of the enemy. Therefore, you use the Sword (Scripture) as a weapon of protection.

Worth mentioning, a sword has a long blade. This means that it has the ability to be far-reaching, affecting those who are not otherwise easily within your reach.

Typically, a knife would represent the tongue – what you speak.

The meaning of knife would be very similar to that of a sword, it does however have a shorter blade and therefore the impact it would have would not be as far-reaching.

When considering the context of the dream, it could include somebody who is able to speak very well, with wisdom and/or discernment. On the flip side, as I mentioned previously, it could be warning you to keep a watch over your mouth and what you speak.

By applying the same principles of interpretation to the gun, we can safely say that a gun is used typically by somebody in authority, whether that somebody is good or bad, and whether the authority they have is of a legal nature or not.

This weapon gives them power to reach far beyond themselves, and, like the sword and knife, has the ability to penetrate deeply.

As such, it is not uncommon to see, in a dream, a church leader – Pastor, Evangelist, Prophet, Teacher or Apostle – dressed up in police clothing and wielding a gun. They have been given far reaching authority from above, to penetrate deeply and ultimately bring life in Jesus after death to self.

Helpful Steps To Interpret Symbolism Not Found In The Bible

In many cases, you will find the symbolism you see in your dreams are often in the Bible, and being used to illustrate the same very things the Lord is wanting to share with you in your dreams. However, this is not always the case, as is with the gun example.

I decided on using the gun example in this post as a teaching point, as it illustrates perfectly why it is so important to know what Scripture says regarding who God is and how He speaks. It is in knowing these things that we can be confident that the way He speaks has not changed, nor will it ever change.

I can say this with confidence, because I know that this is what Scripture says:

Jesus Christ is the same yesterday and today and forever.

These scriptures above make it clear that the God we know today has not changed. In addition, the way in which He speaks and operates has not changed, nor will it ever change. Likewise, He will never change His mind and start doing things differently.

Fortunately for us, this means that we can have confidence in using the same method of interpretation as He has given us examples of in His word. This basically allows us to understand the meaning of a symbol found in a dream today which may not be found in the Bible itself, such as the gun.

Simply put, if God has spoken in the past and present by using illustrations of natural things on this earth today, as a way of explaining and getting a point across to us in our dreams, it would be silly to think that He suddenly wouldn’t use that method just because the particular item wasn’t mentioned in The Bible.

Instead of getting stuck on the semantics, we have to look at the examples He has given, the practical ways He spoke in His Word, and apply those things to today’s world. After all, there are many more things that have been manufactured in today’s age to reference symbolically, and God is using them symbolically in our dreams often.

There are many reasons why the Lord might show you something along the lines of what I’ve just shared, and there are a few things you should do:

Firstly, thank Him. He doesn’t have to show you things to come, yet He says in His Word that He will. What an honor and a privilege to be given inside information. Jeremiah 33:3

Secondly, record the details, as this is the example given to us in the bible. Habakkuk 2:2-3

Thirdly, ask Him why He has shown you this information, knowing that it is never to bring fear. It is likely that, if you’re the one being attacked, He has shown you the plan of the enemy in order for you to speak the Word of God over the situation and stop the attack.

An example of speaking the Word over your life would look something like this;

“Thank you, Lord, that no weapon formed against me will prosper! Thank you Father, that where the enemy comes at me in one way, he will flee in seven! I command every attack against me to stop in the Name of Jesus!”

If the attack is against you, pray for your enemies like the bible instructs us too.

If you’re the one attacking, ask God to reveal the root of the problem. When He shows you, repent and ask Him to sever all ties with the thing that you came into agreement with (offence, anger, whatever it might be). Ask Him to remove any residual hurt or offence, and replace it with His joy and His hope. You will then need to be diligent about casting down any thoughts the enemy tries to plant in your mind regarding the situation that caused the problem initially.

I’ll end with this;

It is extremely important to know that Holy Spirit is your biggest helper in understanding your dreams. He should be your first point of contact when you’re unsure or unclear of a meaning of a dream. Your second source in gaining understanding should always be your Bible; it is God’s tool to teach you all manner of things.

Thank you for reading! Stay tuned as I will soon be releasing more content on the biblical meaning of weapons (among many other things).

If you’d like to know more about making Jesus your personal Lord and Savior, please get in touch via the Contact Page!

We’d love to help you and give you some free resources!