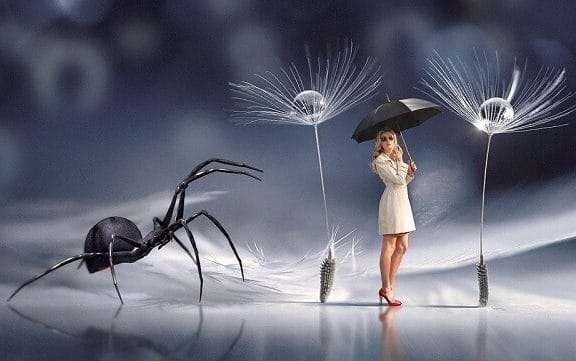 Very few of us like these creepy critters in real life, and it’s even more disconcerting when they start to show up in our dreams. If you’ve wondered whether dreaming of snakes, scorpions or spiders have meaning, according to The Bible, they certainly do. Take note, as you’re being warned!

Spiders are symbolic of the demonic; beware of witchcraft and the occult. Snakes represent lies; intellectual lies we believe in our minds, or even lies we’ve had someone speak to us, or over us. Scorpions represent evil spirits. These can be in men, and cause us pain and harm.

So, what do you do if you’re dreaming of these things and you’re tired of waking up afraid or disconcerted? Be encouraged, because by dreaming about it, God is giving you the power over the enemy. Here is how;

God doesn’t give you dreams to make you fearful. He gives them to you to empower you, to show you the plan of the enemy. Knowledge brings power, and when we know an attack is coming, we can pray and take action against it.

Why Am I Dreaming of Spiders?

You, or somebody near you, has opened a door to the enemy. God is warning you, as when we step outside of His protective hedge, and start doing things, or involving ourselves with things that He warns against, His protective cover is removed. Not because He doesn’t want to protect us, but because we’ve given the enemy – the devil – legal right to access us.

Over twenty years ago, many years before I met the Lord, I was involved in most things one should never ever touch. One of these things was Marijuana. At the time, I was in Malawi and we called this drug, which was readily available at the time in that country, the Malawi Wowie.

One evening I went down onto the beach with a number of friends and we smoked so much I could barely get back to my tent. Somehow I made it back, and once I’d crawled inside, I promptly passed out, all alone while my friends stayed out to party.

It was in this state that I had a dream. Nothing long or elaborate, but very dark. I dreamed I was in a room, trapped, and there were spiders of every size all around me. On the floor, around my feet, crawling on the walls, on the ceiling above my head. I awoke terrified and completely sober.

God spoke to me in that dream and warned me. He told me that I was giving the demonic realm access to myself, and in that place, I was not under His protection because it was a door I had willingly opened. He told me that I had given the occult legal access and as such, I was at the mercy of the enemy to do to me as he saw fit.

I wasn’t a Christian, was not saved, had not given my life to the Lord and didn’t understand that it was even God speaking to me. Truthfully, while the dream was very disconcerting, I wasn’t even sure it had any meaning, and thought it was just the Malawi Wowie speaking. As such, I went right on living that crazy life, which ultimately had me attacked physically by demons about 13 years later. I’ll put a link below to access my story in case you question whether the demonic realm is real. It is very real and that encounter left me covered in bruises. Demons can hurt you.

The point of sharing this however is, God was warning me. Spiders in our dreams are a very clear warning that we, or someone close to us, has opened a door to the enemy and we need to be very VERY careful and get that door closed quickly! To enjoy the benefits of Gods protection, we need to live according to His Word. It is that simple.

Why Am I Dreaming About Spiderwebs?

A spiderweb is a place of entrapment. The enemy is setting you up – be aware, pray and ask God for guidance that He may show you the way out! There is always a way out with God! 1 Corinthians 10:13

Why Am I Dreaming of Snakes?

A snake is symbolic of a lie that we’ve believed. You’re likely being harassed by lies or distortions of the truth.

It was the snake that deceived Adam and Eve in the Garden of Eden. A lie that was spoken to their minds, that was both enticing and convincing enough to have them disobey God, which ultimately led to the fall of man. Dreaming of snakes is a warning to not believe a lie that the enemy has planted in your mind that will ultimately lead to your destruction.

The devil’s playground is our mind. We tend to think that if we have a thought, that that thought belongs to us, and this is often not the case!

Unfortunately, however, that is exactly the enemies plan. Demons on assignment straight from hell are standing by to plant ideas and thoughts in our minds, hoping that we won’t recognise it for what it is – a plan to lead to our destruction.

If You’re Dreaming About A Snake in A Tree

A snake in a tree represents a leader in your life who is operating with, or under, a demonic spirit.

Lies can be planted in your mind by way of a thought or idea, OR, they can be spoken over you or too you, by someone in your life that the enemy is using to hurt you.

For instance, perhaps your mother / father / boss said something along the lines of, ‘You’re totally useless, you can’t get anything right!’

If you don’t know the truth of what Gods Word says about you – that He knew you before you were born, that He planned you, knows you and knit you perfectly together in your mothers womb – then you could believe this lie that the enemy has spoken over you, and it can affect you for years, completely derailing your ability to believe in yourself. Lies are powerful, but only if we don’t know the truth about who God says we are – valued, loved, special, and planned with purpose!

If You’re Dreaming About Being Bitten by a Snake

Being bitten by a snake in a dream means that you’ve believed the lie, it is extremely painful to you and will have lasting effects. Take courage that God can heal this if you allow Him in.

Why Am I Dreaming About Scorpions?

Scorpions represent evil spirits. These can be familiar spirits that hang around, speaking lies to our minds, or even spirits being used in other people to cause us harm. Our war is not against flesh and blood – in other words, don’t fight the person, fight the demon behind him or her, with prayer!

What To Do If You’re Dreaming About Spiders, Snakes and / or Scorpions

If you’re dreaming about spiders, ask God to show you where you’ve opened a door to the enemy, giving him legal access to you. This might not be something you’ve personally done, but someone you’re doing life with, whom has access to you in a personal intimate way, who has opened the door.

When God reveals this to you, follow these steps;

Rejoice – Freedom is yours!

Remember now – it’s your job to stay free. You now need to walk it out and stay away from that thing or that person that had opened the door to the enemy!

Your war is not against flesh and blood. This means your battle is against the enemy and his schemes, not the person / people that the enemy is using. Ephesians 6:12

If you’ve been spoken to badly, and had lies spoken over you that has caused you great pain, your biggest weapon will be forgiveness.

Go before the Lord, as hard as it may seem, and release those people.

If you don’t have a ‘want to’ to forgive them, you can ask the Lord and He will help you and give you the desire. It doesn’t happen over night, but when you forgive out of obedience, eventually your heart will catch up to your head, and the Lord will honor that.

The Bible says in Luke 10:19 that He has given us authority to trample on snakes and scorpions and to overcome all the power of the enemy.

As crazy as it may seem; when we’ve been hurt, holding onto unforgiveness is like drinking poison and expecting the other person to die. The best course of action really is to act in the opposite spirit – that is – operate in kindness, meekness, gentleness, forgiveness etc., and THEN go to war in the spirit! Pray for your enemies, and declare the truth of Gods Word and His protection against you!

As an example, pray as follows;

Father, thank you that you know me and know everything about this situation. Lord, you know how deeply I’ve been hurt by so-and-so, but Lord, right now I make a decision to forgive them, even though you know that I really don’t want to.

I trust you to change my heart God, and I release and forgive them out of obedience to Your Word. I honor them, and I ask that You forgiven and release them Lord, and Bless them in the Name of Jesus.

I take authority over every demonic spirit operating through them and against me, and I declare in the Name of Jesus that you have no power over me! I trample on your head like the scripture says, and know the Word to be true that says, ‘no weapon formed against me will prosper!’ I silence you now in the Name of Jesus!

Thank you Father, thank You fight my battles for me, in Jesus Name

Remember, forgiveness is not a feeling, it is a decision!

Thank you for reading!

Battlefield of the Mind – An incredible read by Joyce Meyers that deals with the enemy and how he speaks and uses our minds.

Crossing the Jordan; There is a Golden Road for Everyone – My personal story of being physically attacked by demons, and getting set free. (Free first chapter download available from our shop).

If you’d like to know more about receiving Jesus as your personal Lord and Savior, read more here!